Spring arrives Rijpfjorden! When we sampled first time 4 May the sea was still in a «frozen mode». Sea water temperatures around the freezing point (-1.8 °C) with beautiful ice lamellas on the bottom of the sea ice covered by a ~1 cm thick carpet of brownish ice algae. Sea ice was still forming and nice stalactites due to sea ice formation and thus brine rejection was seen from the underwater filming with the ROV. Dominating ice algae were the pennate diatom Nitzschia frigida which is normally the most numerous species to be found in first year sea ice around Svalbard and elsewhere in the Arctic (see picture).
The zooplankton community in Rijpfjorden in May 2013 consists mainly of the large Calanoid copepod Calanus glacialis. Now impressive abundances of C. glacialis females exist just under the sea ice. They have nice green guts – taking advantage of ice algae washed out from the sea ice due to tidal currents. The number of females with green guts has increased steadily from the beginning to mid-May hand in hand with the egg production rates. 6 of May roughly half of the inspected females had green guts while in mid-May almost all (80%) have green guts. The egg production rate started low (mean 3.5 eggs per female per day) but is increasing and has almost tripled (11 eggs per female per day) today with egg clutch sizes of up to 78 eggs per female. In ice free Kongsfjorden maximum egg production rates (65 eggs per female per day) were reached in early May this year when the phytoplankton bloom was peaking. Similar rates will soon occur in Rijpfjorden where the production has been a bit delayed due to algal food limitation. Still the ice algae are holding their grip to the bottom of the sea ice in Rijpfjorden, but as soon as the sea temperatures rise a bit more they will be slugged off and Calanus glacialis will get access to more food. In the sea ice covered Billefjorden close to Longyearbyen, the C. glacialis egg production rates this year have increased steadily from the sea ice algae started to grow in early April (one month earlier than in Rijpfjorden!) reaching maximum egg production rates these days (66 eggs per female per day). 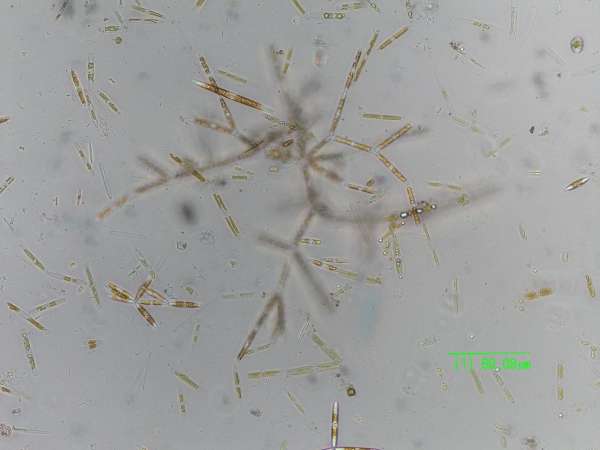