One of those days…

It began promising. The weather forecast was quite good, although whiteout in the beginning, it should turn sunny and stay rather calm. Early birds as we are, we left already after lunch for the field site. We, in this case, were Janne, Malin, Josef, Daniel and ROVi. That day (Wednesday May 07) an ROV transect under the ice, horizontal plankton net tows and deployment of sediment traps were on the agenda. A second hole for ROV to be recovered through was quickly made, and all systems worked fine. On the way from hole 1 to 2 we got some nice video of a busy under-ice fauna: Lots of copepods and other zooplankton having a great time just below the under-ice surface. At whole 2, the ROV was just out of reach for Janne’s arm, when the system suddenly failed. Manually we pulled it back on its tether line. Back at start, it seemed fine. On the second try, the same result, system failure just an arms length away from recovery. This time, it would not respond back at base either. A quick failure survey revealed that the main cable was twisted and broken. It would run fine on the 30 m extension though – unfortunately that meant we had to make another hole 30 m away from start, not 50 as planned. While Janne, Malin and Josef made another hole, Daniel realized the second failure of the day. The “GoPro” camera, mounted on the ROV to get some HD video, had drowned. A quick rescue operation got the memory card in a warm pocket (turned out later that it was fine!), but the camera is dead, dead, dead.
Reaching from hole 1 to newly made hole 3 was done in a minute or so (as it should be), and Janne began to deploy to here well thought-through horizontal under-ice plankton sampling construction, which Malin and Josef still have not understood (Daniel faded out before even trying to understand what is going on). As it had become pretty late already, we decided to postpone horizontal sampling and only deploy the sediment traps. Easier said than done, as it turned out that Janne lost control over the mechanisms of her construction. A lot of swearing and shouting later, all sediment traps eventually disappeared under the ice, where they still are. Another ROV deployment will hopefully give some information on the actually position of these traps, which might be far from different from the originally planned one.
On the bright side: the sun came out and we had a beautiful evening in the midnight sun. And we had a furry white visitor: a polar fox passing our camp in the morning. 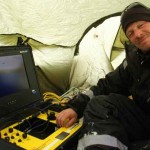 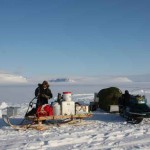 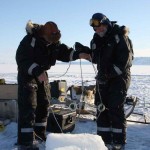 One Response to One of those days…