Snow shoveling day (not much else happened)

Today we removed snow. A lot of snow.
After a late breakfast (at least for some people late- turns out that Janne can actually sleep in…) we started to remove the snow next to the container to make place for the lab tent.
It was a lot of snow. It took all day. We also dogged out the scooter sledges and Einar serviced both scooters which was very good because this helped us to transport all the snow down to the sea. In the time between digging snow Daniel got the Iridium-internet to work- eventually.
At the end of a whole day of shoveling snow a hot bag of dry-tech tastes surprisingly good. While digesting our food we suddenly heard a bang which set everyone into action except for Malin and Daniel who did not take this noise seriously. Turned out a polar bear had stumbled over our trip wire that we set up around the camp. By the time we figured that out the bear was already running away. Apparently he found the sound of the explosive more alarming than Malin and Daniel.
Daily sum up: Cubic meters of snow removed: ca. 48; Polar bears approaching camp: 1. Aching muscles: Countless.

—-
This e-mail was delivered via satellite phone using GMN’s XGate software. Please be kind and keep your replies short. 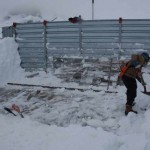 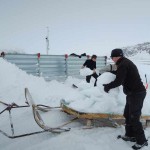 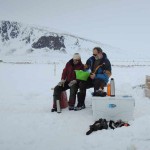 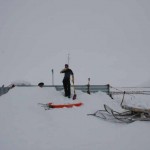