As part of the recent cruise aboard the K/V Svalbard, Matt Alkire (Polar Science Center, University of Washington) was keen to collect core samples of sea ice wherever possible.  Although there was no available sea ice in Adventfjorden, young sea ice was found in the innermost regions of Billefjorden and Rijpfjorden.

In Billefjorden, ice growth was just getting started and most of the ice consisted of a mixture of slush, grease ice, and pancake floes around the interior of the fjord.  Since the ice was not thick enough to set foot upon and collect actual cores, slabs were sawed from floating pieces of pancake ice 8-10 cm thick. 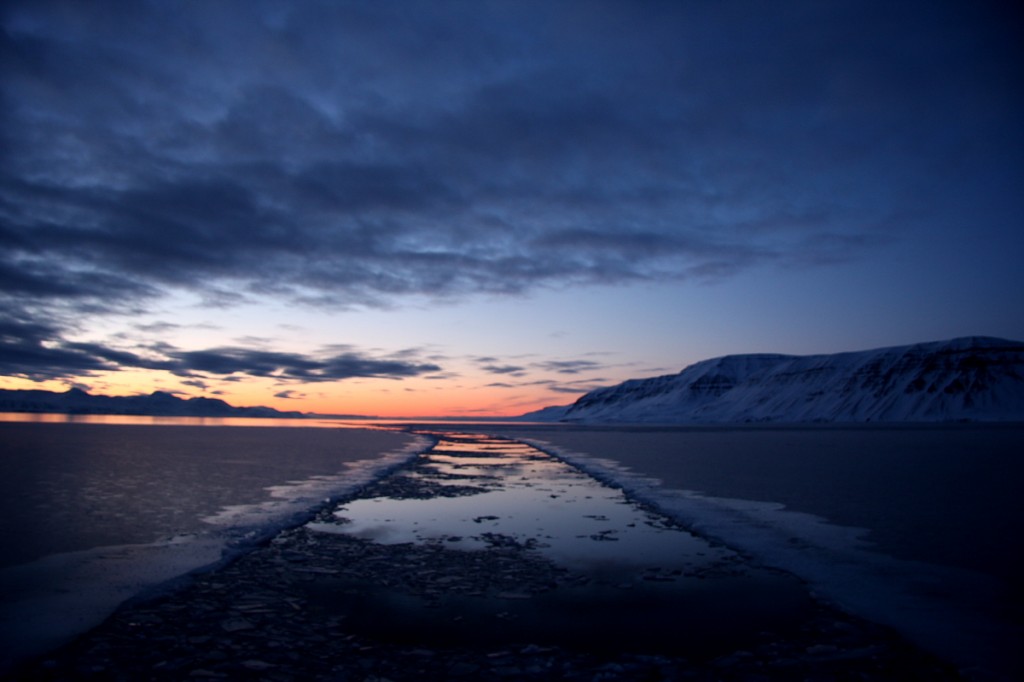 In Rijpfjorden, the ice was thicker and composed of larger, packed floes 12-15 cm thick.  Instead of sawing slabs of sea ice from pieces floating in the water, three cores were collected from one of the larger floes with a hand-powered Kovacs Ice Coring System (provided by Frank Nilsen).

Alkire is a visiting researcher to UNIS, working as part of the U.S.-Norway Fulbright Scholar Program.  He will be at UNIS until early May, participating in cruises and excursions around the fjords of West Spitsbergen in search of sea ice.  He hopes to study the chemistry of the ice in order to help track meltwater from surrounding glaciers as air and seawater temperatures continue to increase around West Spitsbergen.  The basic concept works like this:  glacial meltwater enters the fjords in summer and forms a plume of fresh water over the surface of the fjords.  This freshwater is mixed deeper into the water column as autumn and winter winds blow over Svalbard.  However, as sea ice forms over the fjords, a record of the fjord’s chemistry is partially preserved in the ice matrix.  Alkire hopes to use this record as a marker for the influence of glacial melt.  He hopes to collect additional sea ice and surface water samples in Billefjorden and Templefjorden as winter progresses and the sea ice becomes thicker (hopefully).